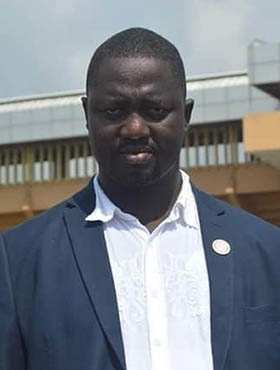 In the dark days of the civil strife in Liberia, Sidi Brima Kamara’s family joined many others as they sought refuge in neighbouring Côte d’Ivoire, where his father became the Refugees’ Chairman and it was during this period that he introduced Sidi Kamara to the art of interpreting. He would request him to occasionally interpret from English to the local Krahn language spoken by both Ivorians and Liberians.

He subsequently sent him to a local French school in Nézobly, Toulepleu. Since he had a knack for languages, two years later, he was able to interpret from French to Krahn in addition to his already acquired skills from English to Krahn.

In 1995, his uncle, a captain in the Armed Forces of Liberia, (AFL) lured his father to return home with Sidi Brima Kamara, arguing that it would be the opportunity for him to attend an English school.

Upon arrival in Monrovia, Sidi Brima Kamara was enlisted in the Armed Forces of Liberia (AFL), which was the fighting force loyal to the beleaguered President Samuel Kanyon Doe. He was placed in the Criminal Investigations Unit where he was appointed Chief of Espionage as well as an interpreter for the AFL/ULIMO Forces. This was because there were some French-speaking troops within the Charles Taylor-led National Patriotic Forces of Liberia (NPFL) recruited from Burkina Faso and Côte d’Ivoire.

He was forced to flee Liberia again in 1998 after the Camp Johnson Road massacre. It occurred when rival troops were hunting down Roosevelt Johnson, the ULIMO-J faction leader.

Back in Côte d’Ivoire, Sidi Kamara continued his education in French and upon completion, returned home, this time, to work with the Liberia Translation and Literacy Organisation (LIBTRALO) where he served as a Krahn interpreter and translator and at the same time, started teaching French.

In 2007, he met Brima Kelson Sesay, Head of the Language Unit of the Special Court for Sierra Leone (SCSL), at the head office of LIBTRALO. Brima Kelson Sesay was there as a professional trainer of local interpreters. It was Sidi Kamara’s first attempt at simultaneous interpretation, court translations and interpreting.

His experience as an interpreter/translator at the SCSL was traumatic. The trauma was worsened by his personal involvement in the civil war against the background of his knowledge of happenings behind rebel lines. As someone who took an oath to perform his duties, he cannot reveal the truth behind the dark curtain. He lives with this truth today as a slice of his life.
Back to the list of interpreters