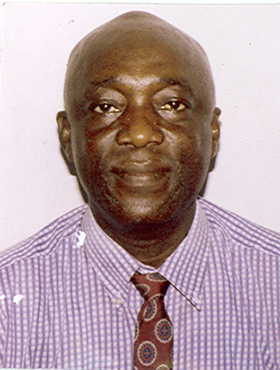 Lansana Sorie Kamara grew up in a modest family. His parents were involved in small scale farming and petty trade, activities he participated in as a child. He picked up new languages through his interaction with kids from diverse backgrounds.

He attended the Roman Catholic Primary School and Schelenker Secondary School, both in Port Loko and later, St. Helena Secondary School in Freetown. He has a BA in in Linguistics and Diploma in Adult Education from Fourah Bay College, University of Sierra Leone and Commonwealth Certificate in Youth Development from the University of Ghana, Legon.

He penned and translated articles for the Themne newsletter at the Provincial Literature Bureau. He was a language and Cross-Cultural Coordinator at the US Peace Corps. He worked with the Institute for Sierra Leonean Languages and has experience as a writer, translator and transcriber.

Lansana Sorie Kamara learnt about the Court through the Partnership Coordinator and was recruited in Freetown in 2003. He attended an interpreter training course at the SCSL. He worked from Themne and Krio to English both at the SCSL and the ICC.

In addition to interpreting at court sessions and preparing witnesses, he translated the rules of procedure and evidence, and developed a glossary of legal terms in the local languages. He was one of the trainers in the Court Legacy Project and is currently working part-time as interpreter for the Commission of Inquiry established by the Sierra Leone Government.
Back to the list of interpreters