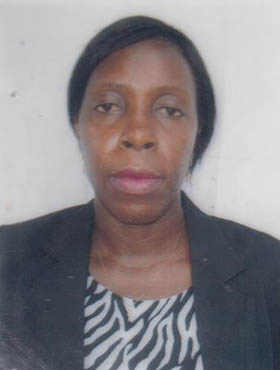 Joyce Royston-Wright is a Sierra Leonean of both Sierra Leonean and Liberian parentage. Since, her paternal grandmother hails from Liberia, part of the family resides in Liberia practicing farming and the other, in Sierra Leone. She spent vacations in Liberia where she mastered the language. Her mother is an educationist and her father an accountant. As her parents were often absent, she grew up with her grandparents in Freetown through whom she imbibed her moral values, in the midst of a hustling and bustling city. Her stay in Liberia and travels to various parts of the country facilitated the acquisition of different languages.

Joyce Royston-Wright attended the Annie Walsh Memorial School, did her G.C.E 'O’ levels, proceeded to the Milton Margai College of Education where she pursued Business Studies and Krio, later went to the Njala University where she graduated with a Bachelor of Arts degree and a Masters at the Institute of Public Administration and Management.

When the SCSL advertised vacancies for interpreters, Joyce Royston-Wright applied and was recruited. She successfully went through a training course for interpreters working in Krio, English and Liberian English. She acquired a wealth of knowledge. She has translated books from English to Krio for PLAN International, the West African Network for Peace Building WANEP) and played the dual role of interpreting and translating at the SCSL trials from 2004–2012. She was part of the team of interpreters who developed a dictionary for the Krio language before the Court closed its doors.

The SCSL opened her eyes to the war situation and it root causes and effects. As a result of her deeper understanding of the situation, she became more humane in her interaction with less privileged people in society. She acquired knowledge about international law and how it differs from local laws. For Joyce Royston-Wright, the SCSL experience was rewarding because as an interpreter, she played her part in the transition to the acquisition of peace. The most trying moment for her during the trials was the fact that interpreters constantly felt threatened.
Back to the list of interpreters