What happens at the point of language contact when social pressures conflict with professional ethics?

The linguistic situation of Sierra Leone posed an interesting challenge to a hybrid tribunal such as the Special Court for Sierra Leone (SCSL). Sierra Leone is one of the smaller countries in West Africa; its population is estimated to soon approach 8 million. Over 20 languages are in use of which Mende, Themne, Limba, and Kono are the most important and widely spoken indigenous ones, but they exist besides the official ex-colonial language English and its Creole descendant, called Krio.

During the war, the importance and relevance of Krio grew enormously, especially among the young population. In the early 90s, not only the upcoming RUF (Revolutionary United Front) under the leadership of Foday Sankoh, but also the Sierra Leonean Army decided to increase the size of their forces by enlisting in some cases children but in any event mainly young, unemployed people. Their common means of communication became Krio, which led them to neglect their ethnic languages. Furthermore, the new leaders acknowledged that they had to speak Krio in order to be understood, not only by their direct subordinates, but by the citizens in general. Therefore, unofficially, but powerfully, Krio has started to replace English in certain official, mainly political, domains where oral communication prevails. The other important war party, the Civil Defence Force (CDF) under Sam Hinga Norman, used mostly Mende, which is the language that refers to the ethnic group with the same name to which most of the CDF fighters belonged. Mende also serves as a lingua franca in the south and east of the country.

Languages at the Special Court for Sierra Leone

The SCSL’s official language was English, which meant that the language spoken during hearings was English and that all written records are in English. Although there are no fully reliable figures, it may be that during and right after the war two thirds of the population could not read and write English (or any other language). Even though there has been a strong and outspoken determination by the Special Court to render all public documents accessible to the Sierra Leonean (and international) community and to keep all the proceedings public, the language barrier remained high.

However, access to first-hand information was not restricted in the area of the written. All the accused persons as well as all the witnesses were entitled to speak in the language of their choice and to have everything interpreted into the language of their choice. Yet again and very unfortunately, the Sierra Leonean audience in the public gallery was not privy to access the court′s interpretation of the hearings, which was reserved to the people inside the courtroom. In order to compensate for this negligence, the court’s Public Affairs Office had produced regular radio broadcasts containing portions of Krio interpretations of the testimonies and video recordings with voiceovers in Krio and three of the most widely spoken languages that were shown in the provinces by the SCSL Outreach Section. On top of their task during the trial, the interpreters had to do those voice-overs as well.

While during trial the witnesses with their oral testimonies were moved into centre stage where they used their chosen language, before trial Sierra Leonean investigators, police officers, and prosecution as well as defence lawyers tended to use Krio and Mende as their means of communication with (potential) witnesses for convenience reasons.

This fact bears important consequences. One, due to the high social status of these court officials (potential) witnesses tended to accept Krio as long as they felt they had some command of it. Once they were in court, however, they realized their key role and when they then were explicitly asked to choose and to use the language which they felt the closest to and which they would consider their first choice language, some witnesses tended to choose another language than the one they had used so far, especially those who had never felt very comfortable with their first choice. In the case of the Civil Defence Forces (CDF) matters were even more complicated by the fact that Mende came into play as everything was being interpreted into Mende for two of the CDF accused. An estimated 75% of the witnesses chose to speak Mende. During the investigation phase, the Prosecutor used Sierra Leonean investigators, not trained in interpreting, who spoke Mende and who would then in turn translate. None of the prosecuting lawyers spoke Mende, but with the exception of the international ones, most of the defence lawyers did.

Further, the use of mixed personnel may also create a situation where on the one side international and – depending on their language skills – Sierra Leonean investigators rely on English-speaking witnesses as non-trained field interpreters. If none of the SCSL personnel was fluent in a requested language, an educated person was usually assigned by the village chief. The court officials had neither time nor the expertise to test the person’s qualifications, linguistic or in terms of codes of conduct and ethics regarding interpretation tasks.

During the hearings, the Sierra Leonean defence lawyers who were mastering the language of the accused they represented, were fast in interrupting the case constantly by telling the judges that the interpretation was faulty, a strategy to irritate the other side’s witnesses and to break their flow of testimony. It was also a strategy to demoralize the interpreters by “punishing” them to work against their “own people”.

Since the country was in a war period for over 10 years the official Court interpreters had no previous formal training at a school of translation and interpretation, they were all extremely talented and had undergone some in-house training. It was a big challenge for the organization of an international tribunal and the interpreters in a country where almost everybody had been involved in the war either as victim or as perpetrator. Yet, only Sierra Leoneans mastered the languages needed to run the court services. 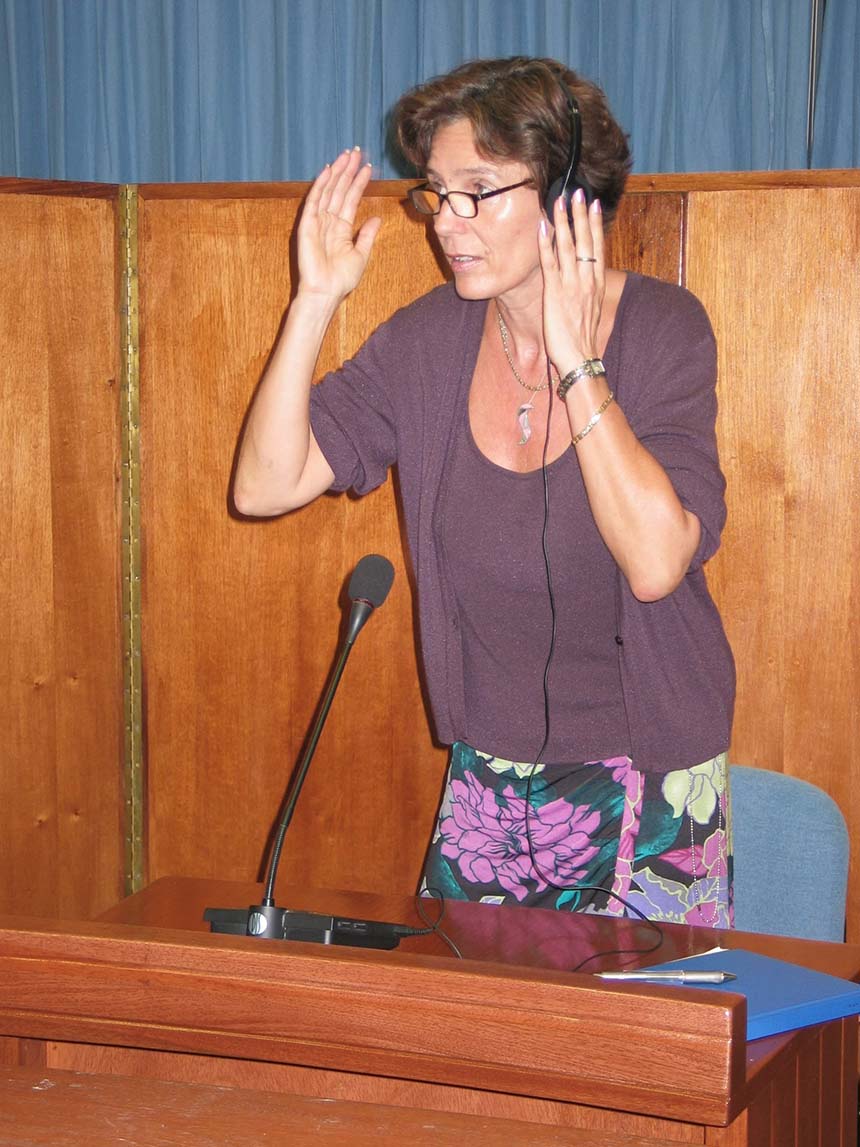 Unlike other multilingual organizations that are only working with official languages and with interpreters holding a diploma from an internationally recognized school of interpretation, the SCSL could not recruit such staff, but decided to select the most suitable applicants and got the training support from the ICTR Language Section for a four week introductory interpretation training to the selected persons. Later the court recruited a Head of Language Unit who provided permanent training for and monitoring of the interpreters. They were Sierra Leoneans with a high command of English, recruited from either the university (mostly linguists), the teachers college or among teachers of secondary schools. Since Sierra Leone has a rather long history of attempts to standardize its most widely used languages, there had also been an evolvement of language expert personnel for the four national languages, Krio, Limba, Mende and Themne.

The importance of the local court interpreters was eminent. Finding evidence and doing justice are processes that are performed through language. In multilingual court cases, the interpreters are often the only people who have a full understanding of not only all languages used, but also context, linguistic resources, social status and power relations. But as shown above, the hybrid nature of the SCSL created a difficult environment for the coherence and consistency of (some) evidence. Initially, not enough attention had been paid to the specific multilingual nature of Sierra Leone and hence to the needs for the court, the social value attached to the literacy/illiteracy component and to the individual languages, and the quality of interpretation.

One of the most important challenges was to fully and deeply understand the professional role of an interpreter, i.e. being a linguistically knowledgeable person who provides that knowledge as a paid service to the court. In a post-conflict country, however, it is very difficult for interpreters to not have an opinion about the case for which they work. It is difficult not to look at the content of the sentences in terms of their meaning for the case, but solely in terms of linguistic meaning and adequate rendition in the target language. Professionalism requests impartiality and obliges interpreters to leave their personal opinion outside the court, expressing it only as a private person. And yet, because of the risk of vicarious traumatisation there must be time outside of the court room to talk about one’s feelings in a secure space. We tried to provide that space for the interpreters, but when looking at the pressure it was never enough.

There are other ethical rules that are more subtle to apply correctly and these are connected to socio-linguistic principles. The sociological and cultural frame in which language is used comes into play here. Sierra Leonean society is a highly stratified and authoritarian one. The stratifying factors that are relevant for the argument are age, gender, educational background and the urban-rural divide. In other contexts, social status can also be related to political, religious or army positions or to positions within a male or female secret society. The international criminal court, on the other side, is organized along the principle of universalism and everyone must be treated the same. Interpreters were sometimes yelled at by the public and accused of using foul language in a prestigious court when they were merely and craftfully rendering the language register of the witness in court.

Dr. Rebekka Ehret, University of Applied Studies Lucerne, Switzerland (rebekka.ehret@hslu.ch) is a social anthropologist and linguist. She was the Chief of the Language Unit at the SCSL until 2006 and has since worked as a consultant with other international war tribunals.