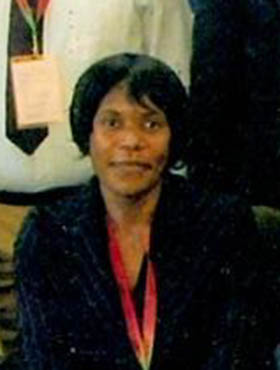 Hawa Georgette Tucker is a former interpreter at the SCSL and ICC. Before working for these international tribunals, interpreting and translating were part of her work as a journalist at the Sierra Leone Broadcasting Service, which later became the Sierra Leone Broadcasting Corporation. When she was recruited by the SCSL in 2007, she received training in court interpreting and successfully passed the interpreting exams. She was equipped to work in international court proceedings and acquired terminology-development skills. She contributed to the glossary created at the SCSL. She covered the Charles Taylor, Revolutionary United Front (RUF) and the Civil Defence Forces (CDF) trials.

Despite the efforts made to protect the identities of interpreters during the trials, the consequences of the civil war did not spare Hawa Georgette Tucker. She remembers her nephew who bore the brunt of the strife and escape to Liberia at the tender age of 10. She experienced vicarious trauma spending many sleepless nights seeing images of pregnant women whose stomachs were cut open, women and girls whose lips were cut and houses set ablaze with people locked in. It was not easy interpreting the horrors of the war and even today, she is still haunted by these memories.

Hawa Georgette Tucker rose to the helm of the Sierra Leone Broadcasting Corporation as the Regional Station Head for Kailahun in 2012. Her passion for journalism and human rights has seen her participate in related training. She is also part of a journalists’ mentorship programme. She has been involved in peace building and conflict resolution activities, as well as campaigns against gender-based violence She has a penchant for community activities and is a member of the Western Area, Sierra Leonean Red Cross Society.
Back to the list of interpreters