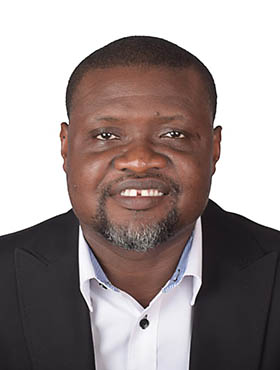 Edward Foday’s family was displaced in 1994 after their house was destroyed by the rebels. He was forced to abandon high school and get a job to take care of his parents.

He was recruited in April 2004 by the SCSL in the first cohort of interpreters. He worked in Freetown and the Hague. He completed his MPhil Linguistics studies while working at the courts. After the trials, he graduated with a Master’s degree in International Development from the UK.

Edward Foday attended a short training facilitated by ICTR colleagues and eventually became a trainer. He trained new recruits, including some from Liberia. All the recruits were inexperienced and training was too short because the “legalese and terminology of international law and war crimes were a novelty, probably even for some of the locally recruited lawyers. There is a close nexus between language and culture and so there were no easily available corresponding equivalents for some of the English and legal words used in the courtroom for local dialects and languages.” He co-authored the glossaries of frequently used Mende and Krio terms.

For Edward Foday, simultaneous interpretation represented faceless voices coming through the microphone. Some lawyers would confess buying time by accusing the interpreters of wrong interpretation, one of the hazards of the interpreting trade.

Another difficulty was the multiplicity of English accents used by various speakers from multiple backgrounds, some of whom were also struggling to speak proper English, including the lawyers. At one instance, they had to interpret an English testimony into English again for one highly placed Liberian witness, who testified in English, as the judges could not understand his ‘English’.

Interpreters were trained and constantly reminded to be ‘professional’, but interpreters are humans too. There was one testimony that broke him down. A mother of an amputee child testified that a few weeks after her daughter’s arms were amputated, the daughter kept asking her mother: “Mama, when will my arms grow again?” Although this did not seriously affect his delivery, this experience and few more testimonies would keep him awake for some nights during and even after the trials.
Back to the list of interpreters